2017 proved to be a considerable year for employment law developments and although there is actually relatively little on the legislative agenda for 2018, there is no doubt that many of the developments from the last 12 months will flow into 2018 – keeping HR and employment law professionals similarly busy.

Reflecting on what happened in 2017, let’s have a look at the top 5 issues that HR practitioners should have on their radar for 2018:

Uncertainty in employment status continued to be scrutinised throughout 2017, with a focus on those workers in the gig economy working on short-term, “gig”-like assignments such as Uber and Deliveroo drivers. Uber, Deliveroo, CitySprint, Pimlico Plumbers and Addison Lee were amongst the many businesses whose working models were under scrutiny by the tribunals and the CAC in 2017, with call for greater clarity over employment status definitions to ensure that “workers” benefit from basic employment rights such as the national minimum wage and holiday pay, whilst at the same time allowing those who are genuinely self-employed the ability to continue to work flexibly. The Uber and Pimlico Plumbers cases will be heard by the Court of Appeal in 2018.

2017 saw the publication of the Taylor Review on Modern Working Practices which made extensive and comprehensive recommendations to improve clarity in relation to employment status. Amongst other things, the report recommends that the category of “worker” should be redefined as “dependent contractor”. In November 2017, the Work and Pensions Select Committee and the Business, Energy and Industrial Strategy Committee jointly considered and prepared draft legislation based on the recommendations of the Taylor Review aiming to close the loopholes that are currently allowing potential exploitation of workers and considering a new “worker by default” status – placing the onus on companies to prove that the worker’s status is otherwise as well as provision that workers should be given a written statement confirming their employment status and setting out their rights and entitlements on their first day at work. The government’s response to the review and draft legislation is still awaited, and will be crucial to determining the next steps for gig economy workers and employers alike.

In 2018 the Court of Appeal consider the holiday pay case of King v Sash Window Workshop following the European Court’s November 2017 ruling that a worker who had been incorrectly treated as self-employed, and who had not been provided with paid holiday, is able to accrue and carry over holiday indefinitely and be paid in lieu upon termination for any untaken holiday over the entire period of employment. This case may be of considerable significance to the employment status cases considered above as it extends potential back-dated holiday pay claims where workers have not been provided with their entitlement to holiday pay.

If you engage contractors, consultants, freelancers or casual workers, carry out a review of the employment and tax status of your workforce and the contractual terms of all those providing services to assess whether your workers and employees are classified correctly and the extent of any possible liabilities relating to national minimum wage, holiday pay and tax.

The GDPR comes into law on 25 May 2018. The GDPR will introduce a single legal framework across the EEA and implement more strict rules on the processing of personal data, placing further duties on data controllers and increasing the financial penalties for breach. In terms of employees, the criteria for valid consent to processing personal information will be extended by the GDPR and employers will be prohibited from charging a fee for providing information in a data subject access request unless additional copies are requested or if the request is excessive or unfounded, and even then the fee can only be used to cover administrative costs.

Think carefully about the current basis on which you lawfully process your employee’s personal data for HR and employment purposes. If you currently rely on consent given, the employee has to be informed about how their personal data is held and used, and the consent has to be a positive opt-in, and not consent by default. Remember that consent can be withdrawn at any time, so employers will have to ensure they are able to rely on another ground for lawful processing, and ensure that their current policies and systems are up to date to ensure full compliance with the new regime.

2017 saw the #MeToo and #MenToo social media campaigns highlight the fundamental issue of sexual harassment in the workplace across many different sectors and industries giving a voice and confidence to many to speak out about their experiences. It will be interesting to see if this movement, along with the removal of the fee regime for employees to bring claims, will translate to an increase in tribunal claims for sex discrimination and harassment in 2018 and beyond. Indeed, at the beginning of January 2018 a new call for change emerged called ‘Time’s Up’ which seeks to highlight and address issues in the workplace like discrimination and harassment of any kind with many high-profile backers supporting it.

New Year’s Resolution: Review and update your equal opportunities policies and anti-harassment and bullying policies, provide training for employees on appropriate behaviour at work, and ensure that steps are taken to address complaints promptly and reasonably and that employees are aware of how concerns should be raised.

Employers with more than 250 employees are now required to report their gender pay gap (if any) on an annual basis. The snapshot date for assessing the pay gap will be 5 April every year with reports on mean and median average pay for male and female employees being due the following year meaning that 4 April 2018 will be the deadline for the first reports to be published.

In a similar vein equal pay continues to be at the forefront of employment law developments. In August 2017, the Employment Appeal Tribunal upheld a previous tribunal’s ruling that a group of Asda employees (predominantly female who work primarily in the retail stores) are entitled to compare themselves to their predominantly male comparators who work in the distribution centres in a collective equal pay claim. Asda maintains that the pay discrepancy is solely due to the fact that the demands of the two jobs, and the way their respective rates are calculated, are very different and have lodged a further appeal to the Court of Appeal which is due to be heard by 31 October 2018. The resulting decision could have a great impact on equal pay law in the UK, extending the ability of female employees to compare their pay with men doing different work.

If you are obliged to report in relation to gender pay, ensure that you have the applicable figures for 5 April 2017 and are ready to publish by 4 April 2018. Check the legislation and associated guidance for what is meant by “pay” and “bonus” and the methods of calculation to be used. Remember that the business is allowed to provide a narrative to explain any anomalies in pay and any proposals for addressing them. Consider carrying out an equal pay audit to assess possible liabilities and pay discrepancies that may need to be addressed.

April 2017 saw the implementation of a 0.5% levy becoming payable on employers with an annual wage bill of over £3 million, regardless of sector or whether the employee has any apprentices. The extra funds are to be used by the government to contribute to the costs of apprenticeship training. Employers can recoup some of the cost if they use it for training apprentices. Businesses in scope must report and pay the levy to HMRC through the payroll process and can set up an apprenticeship service account to receive their levy funds back and pay their training providers. Funds not used within 24 months will expire. Funds can only be used up the maximum funding band for the type of apprenticeship it is and cannot be used to pay apprentices’ wages.

New Year’s Resolution: If your company is now subject to the levy, think about how apprentices could be utilised in your business and look at how this would work in order to recoup some of the cost. Although apprentices are more common in traditional trades such as plumbing, they can apply to and be used in respect of senior and management roles in any sector. Remember that an apprentice can be any age and apprenticeships should not just be offered to younger individuals as this may be age discrimination. If you are not subject to the levy, give some thought to how useful hiring apprentices could be as there are many benefits and a government co-investment funding scheme to help with costs.

2017 proved to be a considerable year for employment law developments and although there is actually relatively little on the legislative agenda for 2018, there is no doubt that many of the developments from the last 12 months will flow into 2018 – keeping HR and employment law professionals similarly busy. 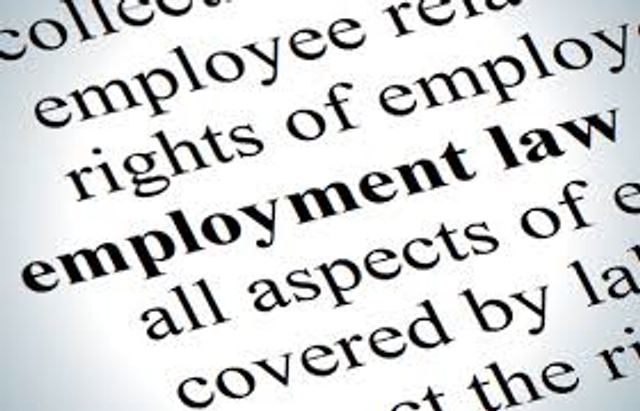